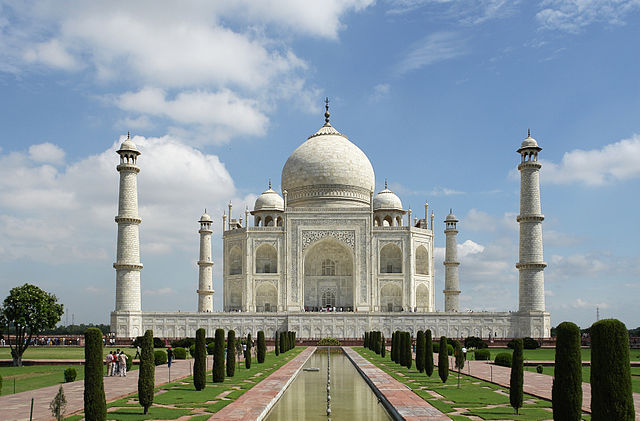 Agra is world famous to the magnificent Taj Mahal, one of the Seven Wonders of the World. A Million people visiting every year to see this beautiful place. UNESCO listed Taj Mahal as a World Heritage Site in 1983. The Taj Mahal is a beautiful white marble mausoleum. It was built by Mughal emperor Shah Jahan in memory of his wife, Mumtaz Mahal. Agar is also famous for some other historical place like Agra Fort, Itimad-ud-Daulah, Jama Masjid, Sikandra (Akbar's Tomb), Guru ka Tal, Mariam's Tomb and Fatehpur Sikri. Jim Corbett National Park is situated in Uttrakhand and this is the oldest national park in India. Jim Corbett is famous for Royal Bengal Tiger and other animals like Elephants, Chital, Deer, Nilgai, F There are also 600 different species of birds. Anyone can also enjoy elephant safari which make this trip full of adventure. Ramganga river in the middle of the forest enhance the beauty of park. Distance from Delhi: 230 km, Best time to visit: September to Novomber, Febuary to May

Also known as Keoladeo National Park or Keoladeo Ghana National Park. This is ideal place for birds lover and home of over 230 species of birds. It is also a declared World Heritage Site and one of the biggest bird sanctuary in Asia. This Sanctuary is one of the richest bird areas in the world and total of 366 bird species including migrating birds. Some other places are Deeg Palace, Government Museum Bharatpur, Lohagarh Fort, Ganga Temple and Laxman Temple.

Nainital is a popular hill station in Uttarakhand. This hill station is famous for his lakes and beautiful surrounding. The Mall Road is one of the best mall road in India. You can enjoy boating and kayaking in lakes. You can reach top of Nainital by using cable car and see the panoramic view of snow covered Himalayan peaks. Some important and must visit place in Nainital are Naini Lake, Mall Road, Naina Devi Temple, Raj Bhawan, Bhimtal, Naukuchiatal, Sattal and G.B. Pant High Altitude Zoo.

Distance from Delhi: 330 km, Best time to visit: March to June and from September to November Mussoorie is known as the Queen of the Hills because of his lush green landscape and lovely weather. Kempty Waterfall is one the best tourist attraction in Mussoorie. Other tourist attraction are The Mall Road, Christ Church, The Ropeway/Cable Car, Mussoorie Lake, Jharipani Falls, Gun Hill. Lal Tibba is the highest point from where you can get a superb view of the snow-clad Himalayas.

Distance from Delhi: 290 km, Best time to visit: March to June and from September to November

Jaipur is the capital of Rajasthan and one of the best tourist attraction in India. Jaipur was founded by Maharaja Sawai Jai Singh II and also known as the Pink City of India. Jaipur is popular due to number of forts, palace and great historical value. Some main tourist attraction in Jaipur are Hawa Mahal, Amer Fort, Jantar Mantar, Nahargarh Fort, Jal Mahal, City Palace, Jaigarh Fort, Albert Hall Museum, Birla Temple etc. Jantar Mantar is also listed in the World Heritage Sites. Ranthambore National Park is one of the largest national parks. This national park is considered the best place to see Indian Tiger in the jungle. Ranthambore is major wildlife tourist attraction due to its large tiger population. Ranthambore Fort is another major attraction in Ranthambore. Ganesh Temple inside the fort is having great religious value. Other place are Jogi Mahal, Surwal lake and Rajiv Gandhi Regional Museum of Natural History. Shimla is superb place to spend some time with your best buddies. Shimla is perfect place to enjoy the winter sport and a lot of fun activities. Places to visit in Shimla are Jakhu Temple, The Mall Road, the Ridge Shimla, Kalka-Shimla Toy train, Christ Church, Rashtrapati Niwas or Viceregal Lodge, Shimla State Museum, Tara Devi Temple and Annandale. Lansdowne is one of the quietest and small hill stations in Uttarakhand and is popular since Britishers came to India. Places to visit in Lansdowne are War Memorial, The Garhwal Rifles regimental museum, Garhwali Mess, St. Mary’s Church, St. John’s Church, Bhulla Lake, Tip-In-Top, Bhim-Pakora, Durga Devi Temple and Hawaghar. Main attraction of this city is Harmandir Sahib Gurudwara (Golden Temple) and Wagah border (the border between India and Pakistan at Amristsar in Panjab). The flag ceremony at the Border is a worthwhile day trip from Amritsar. You can also visit some other place like Durgiana Temple (Lakshmi Narain Temple), Jallian Wala Bagh, Khalsa College and Rambagh. Orchha is Situated 18 Km from Jhansi on the banks of river Betwa. Orchha was founded by the Bundela Rajput in the 16th century. Places to visit are Chattris, Chaturbhuj Temple, Orchha Fort, Jehangir Mahal, Ram Raja Temple and Rai Praveen Mahal. Jhansi Fort is also one of major attraction nearby Orchha. Orchha Wildlife Sanctuary is good place for adventure and nature lover.