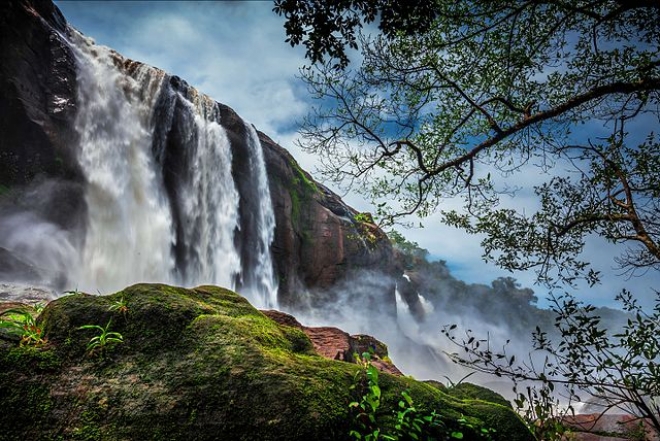 Athirappilly Falls is situated in Athirappilly Panchayat in Chalakudy Taluk of Thrissur District in Kerala, India on the Chalakudy River, which originates from the upper reaches of the Western Ghats at the entrance to the Sholayar ranges. It is the largest waterfall in Kerala, which stands tall at 80 feet. Just a short drive from Athirappilly to the Vazhachal falls, which is close to dense green forests that are home to many endangered and endemic species of flora and fauna.

There is another waterfall on the way from Athirappilly to Vazhachal Falls, in close proximity to the road, which is locally called "Charpa Falls". Athirappilly Falls is the largest waterfall in Kerala and is nicknamed "The Niagara of India".

The railway station nearest Athirappilly Falls is 30 kilometres (19 mi) to the west in Chalakudi Railway Station, and the nearest airport is Kochi International Airport, about 55 kilometres (34 mi) southwest of the waterfall and 58 kilometres (36 mi) south of City of Thrissur. Athirappilly is easily reachable from Chalakudy and Angamaly by taxi or by bus from the Chalakudy and Angamaly bus terminal. Athirappilly is situated on the highways connecting Tamil Nadu and Kerala, amidst thick forest, so night riding is not advised.

The journey from Chalakudy to the Athirappilly Falls passes through a landscape of winding roads, small villages and lush green trees. Visitors can reach the top of the waterfall via a paved path that leads through thick bamboo clusters. From Angamaly the route is in the midst of an Oil Palm Reserve through Ezhattumugham tourism village A steep narrow path also leads to the bottom of the falls. The falls attract visitors from across India, especially during the monsoon months (June–September). About 7 million tourists visit the falls and the Vazhachal picnic spot each year.