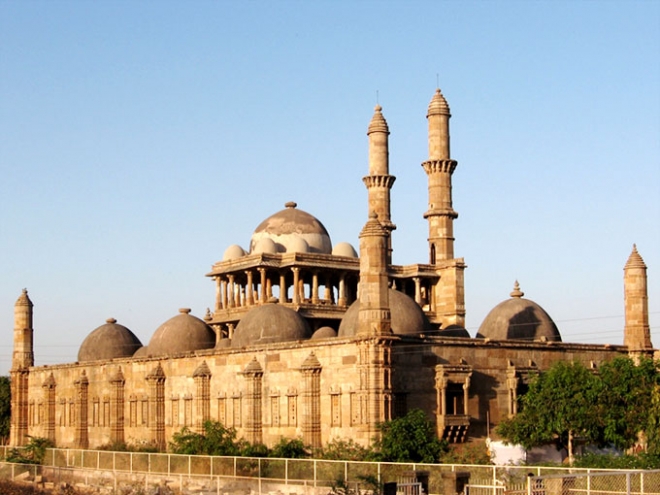 Champaner-Pavagadh Archaeological Park, a UNESCO World Heritage Site, is located in Panchmahal district in Gujarat, India. It is located around the historical city of Champaner, a city which was built by Sultan Mahmud Begada of Gujarat. The heritage site is studded with forts with bastions starting from the hills of Pavagadh, and extending into the city of Champaner. The park's landscape includes archaeological, historic and living cultural heritage monuments such as chalcolithic sites, a hill fortress of an early Hindu capital, and remains of the 16th-century capital of the state of Gujarat. There are palaces, entrance gates and arches, mosques, tombs and temples, residential complexes, agricultural structures and water installations such as stepwells and tanks, dating from the 8th to the 14th centuries. The Kalika Mata Temple, located on top of the 800 metres (2,600 ft) high Pavagadh Hill, is an important Hindu shrine in the region, attracting large numbers of pilgrims throughout the year.

The transition between Hindu and Muslim culture and architecture in the late 15th to early 16th century is documented in the park, particularly the early Islamic and pre-Mughal city that has remained without any change. It was inscribed by UNESCO as a World Heritage Site in 2004.