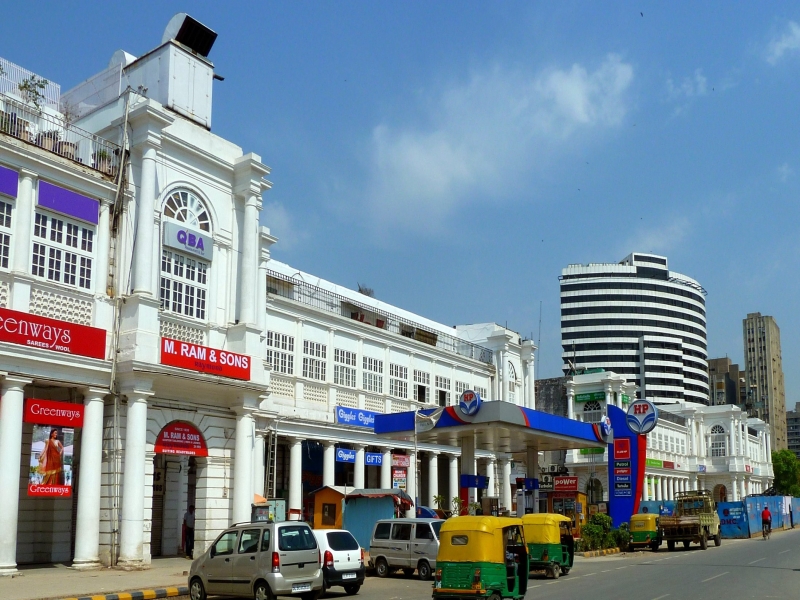 Connaught Place is situated in the heart of New Delhi. It is named after uncle of King George V, the Duke of Connaught, who visited Delhi in 1921. Officially renamed Rajiv Chowk, Connaught Place is one of Delhi’s largest and most important commercial and business districts. This huge, circular colonnaded arcade is home to shops, restaurants, cinemas and offices. Connaught Place is also the hub of Delhi Metro Rail’s network.

You can shop for anything here, from groceries to a car. Among the earliest shops to open here, and still in business, are Wenger’s, Ram Chandra and Sons, Vaish Tailors, the Jain Book Agency, and Delhi’s first art gallery, Dhoomi Mal Art Gallery. The first cinema hall in Connaught Place, Regal opened in 1932.  The PVR Cineplex that replaced the old Plaza cinema hall is among the best in the city. Connaught Place also has emporiums from every Indian state.

The Inner Circle was an open space till the late 1970s, when the underground market, Palika Bazaar was constructed. Palika Bazaar has small shops and stalls selling everything from clothing and fashion accessories to computer hardware and software. Most of the items are at bargain prices but not all are authentic.

Then there is the Central Park, which was at one time dotted fountains and gulmohar trees. Today it has an amphitheatre and water bodies but few trees. It is one of the city’s hotspots for concerts and cultural events.

The shops of Janpath market sell items of latest fashion, priced to suit all pockets. The Jawahar Vyapar Bhavan on Janpath houses the Cottage Industries Emporium, where you can purchase original handicrafts from across the country.

The Outer Circle is made up of Blocks G to P. Showrooms of Digjam, Lacoste, Omega, Rado, RL Exports and TAG Heuer are among those in this circle. The shop Ganguly Brothers has been famous for ages for its clocks and watches.

The surrounding roads are full of offices. Buildings on Barakhamba Road and Kasturba Gandhi Marg house offices of banks, airlines, media and other companies. The Max Mueller Bhavan, American Center and the British Council buildings are situated on Kasturba Gandhi Marg. They are popular for hosting cultural and literary events, besides their libraries.

The Jantar Mantar on Sansad Marg is a historical astronomical observatory. It is also a popular spot for political and social protests.