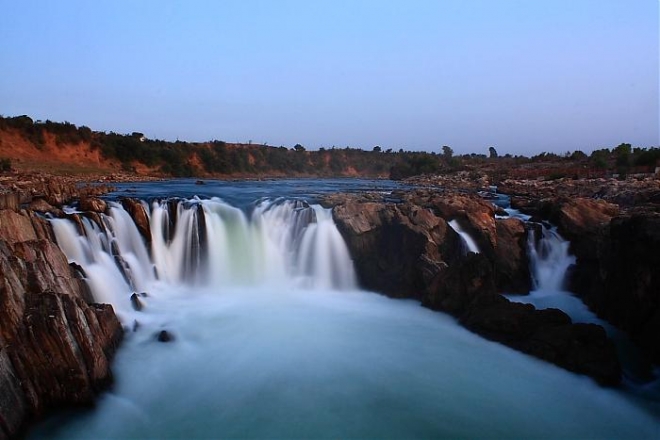 The Dhuandhar Falls (धुआंधार) is a waterfall in Jabalpur district in the Indian state of Madhya Pradesh. The word Dhuandhar is derived from two Hindi words - Dhuan (smoke) + Dhar (flow) meaning a waterfall where we get smoke-flow like feeling (this smoke is formed by water vapours or the smoke cascade).

The Dhuandhar Falls are located on Narmada River in Bhedaghat and are 30 meters high. The Narmada River, making its way through the world-famous Marble Rocks, narrows down and then plunges in a waterfall known as Dhuandhaar. The plunge, which creates a bouncing mass of mist, is so powerful that its roar is heard from a far distance.

The best time to visit Dhuandhar falls is during in Sharad Purnima when Narmada Mahotsava gets celebrated. The white marbles appear spectacular when the moonlight falls on it and give it a silver appearance. Once in Dhuandhar don't forget to have pleasure on a boat ride in the valley of white marble which appears yellow during sunsets.

One can access the Dhuandhar waterfall from the east bank as well as from the west bank of Narmada River. To see the other side of Dhaundhar Waterfall you have to take the Cable Car Service available at Bhedaghat. The Cable Car Service is available at the entrance gate of Bhedaghat. The ropeway facility starts from the eastern bank of Narmada River, crosses the river and then drops you at the west bank of the River. Cable Car Service or Ropeway Facility at Dhuandhar Waterfall charges INR 85 per person for one complete trip. From 1:30 P.M to 2:00 P.M the ropeway facility is not available as the staff goes for lunch.