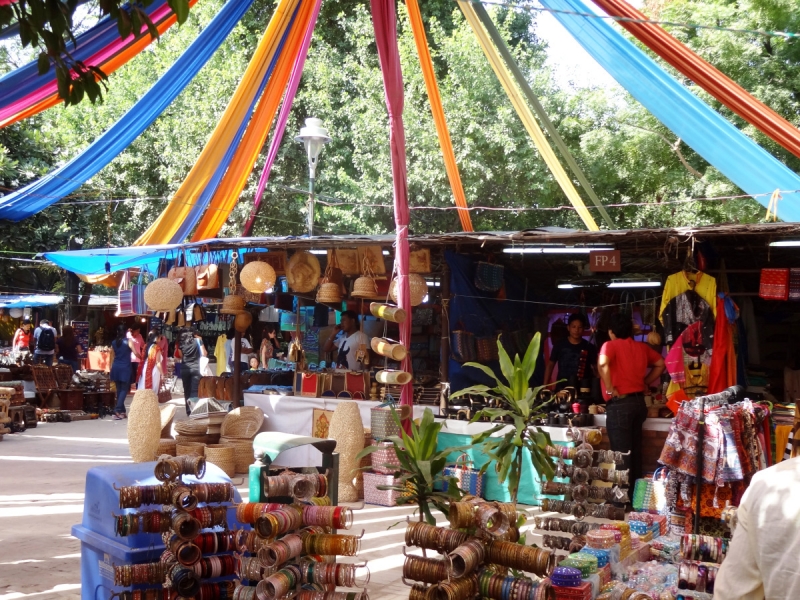 Located at two locations in Delhi, Dilli Haat is an open-air craft market cum food plaza. Offering the ambience of a rural haat, Dilli Haat can be said to be to brain-child of Delhi Tourism and Transportation Development Corporation(DTTDC). The two locations of Dilli Haat are Sri Aurobindo Marg and Pitampura in North Delhi. The Dilli Haat situated on Sri Aurobindo Marg is near All India Institute of Medical Sciences while the second Dilli Haat is located at Netaji Subhash Place. The Sri Aurobindo Marg Dilli Haat was the first to be established among the 2 haats and it was in 1994 while the second Dilli Haat was established in 2008. The crafts stalls in Dilli Haat changes every 15 days in order to bring variation in the haat’s craft collection. On the other hand, the food plaza has permanent food stalls offering cuisine from every Indian state.

Dilli Haat was established by Govt. of Delhi and NDMC, DTTDC, Ministry of Textiles and Ministry of Tourism, D.C. (Handicrafts) & D.C. (handlooms) and Govt. of India in joint collaboration with the aim of encouraging India’s arts and crafts. Dilli Haat is fully wheelchair accessible and also has a bathroom. Covering large areas of land, Dilli Haat is a one stop shopping destination for people looking for traditional art and craft based products. Not only that, the several food stalls with their tasty and hygienic dishes would surely tend to ones taste buds in case a person gets hungry. There are plans to create more Dilli Haats in Delhi with Janakpuri being the third location set to open in August, 2013.

Dilli Haat consists of stalls that sell art and craft products from all over India. Giving its customers the feel of a village market, this bazaar takes good care of their contemporary needs by selling products such as ethnic wares, camel hide footwear, ethnic jewellery with gem work, rosewood and sandalwood carvings, fabric and drapery, silk and wool fabrics and various other handicrafts. The exhibition hall in the complex also exhibits several handicrafts and handlooms from time to time. The food stalls serve delicious local cuisine from various parts of India such as Kebabs, momos and dhoklas and that too in an eco-friendly way.  Not only art and craft along with delicious food, Dilli Haat is also a place where cultural activities such as music, dance and other festivals occur quite often. Comic Con India, India’s first comic convention was held in Dilli Haat, INA. In one line we can say that Dilli Haat is a step towards conserving Indian culture and heritage by combining crafts, food and cultural activities under one roof.

One notable fact about Dilli Haat is that only the registered craftsmen under DC Handicrafts are allowed to set their stalls in Dilli Haat. Stalls are allotted to craftsmen from all parts of India at nominal rates on a rotational basis of 15 days. This is done for the interest of the consumers so that they can get products from Dilli Haat at prices that are not affected due to the maintenance costs faced by the craftsmen.