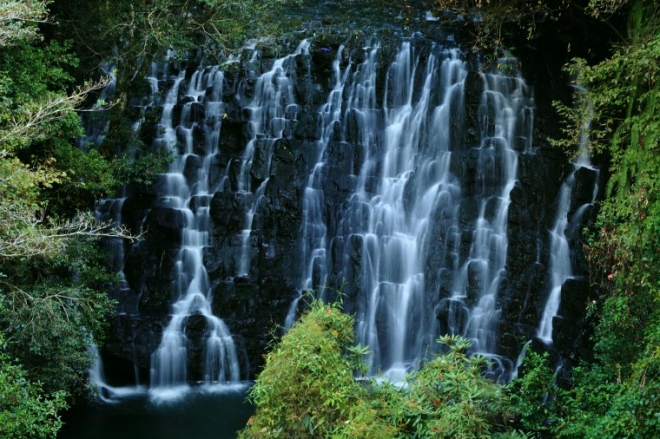 Elephant Falls was the British name of what the local Khasi people once referred to as Ka Kshaid Lai Pateng Khohsiew (or “Three Steps Waterfalls”) since the falls actually consisted of three sections in succession. We learned from a sign here that the British renamed the falls because there used to be a rock resembling an elephant near the left side of the main falls (which I think was the bottommost one). However, that rock was destroyed in an earthquake back in 1897.

Of the three waterfalls (all of which were easily reached by the same short and easy walking path), Julie and I thought the bottom tier was the most impressive. The walking path gently descended from the entrance, and I recalled it was practically almost completely paved with lots of stairs and a bridge traversing the stream between the 2nd and 3rd falls.

Then after descending the last flight of steps alongside the third (bottommost) waterfall, there was a shelter and a little bit of a platform for photo taking while a rope was put beyond the platform to discourage swimming. The photo taken at the top of this page was between the last of the steps and the viewing platform at the base of Elephant Falls.

To give you an idea of how short this excursion could be, we spent about 30-40 minutes to take in all three waterfalls, including the short walking and the photographing. I believe there were an entrance fee and opening/closing hours, but I don’t recall what they were during our visit in November 2009.

Even though we didn’t think this was a total blockbuster waterfall, we did think it was a pleasant diversion due to its accessibility (it allowed us to get close to each waterfall, unlike many of the taller ones we saw in the Shillong or Cherrapunjee area). As a matter of fact, we saw a film crew shooting either a movie, TV show or commercial upstream from the falls as we were passing in and out of the turnoff for the car park.

Elephant Waterfalls can be visited all year round. Though during winters water levels recede a little it still does not take away the charm of the waterfalls. The months right after the monsoon are the best as the water flows with full might and the scenery created is one to remember for a long time.

While the terrain, interspersed with streams and falls will tempt you into one of its many trekking trails, the views will have you busy clicking photographs, the Elephant falls, being a favourite for photography too.

1. Leave early from your hotel to avoid traffic and congestion on the road leading towards the Elephant Falls.
2. A trip to these falls requires walking down a large flight of stairs (around 100 stairs). Hence, it is not recommended for seniors who have little difficulty in walking.
3. There are a few small shops selling cheap souvenirs and eating joints near the parking lot.
4. The stairs might be slippery. So, make sure to wear comfortable footwear with a good grip.

How to Reach Elephant Falls

By Air: The Nearest airport is at Guwahati which has direct flights to all other major cities of the country. One can easily hire a cab or take public or private buses till Shillong. Alternatively, there is a helicopter service from Guwahati till Shillong.

By Rail: Nearest railhead is at Guwahati from where one can either hire a cab or catch public or private buses till Shillong.

By Road: Shillong is well connected by road to Guwahati and nearby major cities of the North-East. Public and private buses connect it to Guwahati and other cities. From Shillong, one can easily hire a cab or auto rickshaw till Elephant Falls which are located just 12 km from Shillong.