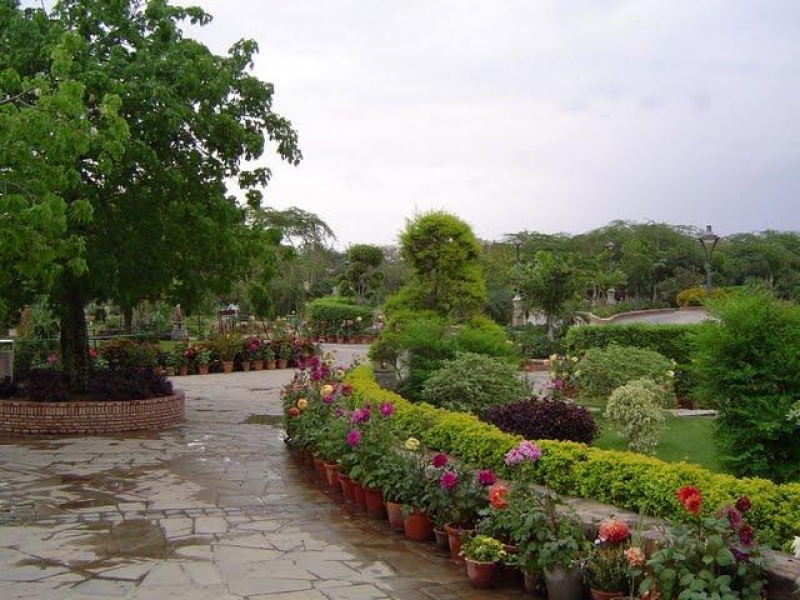 Garden of Five Senses is situated near the Qutub heritage zone in New Delhi. Spread over 20.5 acre, it is located in the Said-Ul-Azaib village on MB Road, south of Saket. The garden, developed by Delhi Tourism Transportation Development Corporation, was opened in 2003.

The garden is home to more than 200 varieties of plants. It also has areas where the original vegetation, mainly trees such as the local Kikar and the thorny ber bush, have been left untouched.

The garden is designed to stimulate the five human senses, and give the visitors a chance to touch, smell, hear, see and taste the natural surroundings.

It is one of Delhi’s famous cultural venues, and hosts programmes round the year. The Garden tourism festival, food festivals, melas, Dandiya dance and cultural programmes are among the events held here.

Soaring birds of stainless steel, mounted on slate-clad pillars welcome you to the garden. An expansive plaza, set on the natural slope of the site, invites you up the spiral walkway. On the other side, a troop of elephants, chiselled from stone, having fun while bathing, invite you to explore.

The garden is divided into different areas. It even has lighting in some areas so that people can come here during the night.

On one side of the spiral walkway is the Khas Bagh, which is modelled on the Mughal Garden.

The water channels are lined with flowering and sweet-smelling shrubs, and trees. The central axis leads to a group of fountains, some of which are lit. Here, there is the sculpture called A Fountain Tree. There are more than twenty sculptures around the Khas Bagh.

On the other side of the walkway is the food and shopping court.

The Trail of Fragrance ends at a rocky ridge, where there is a stainless steel sculpture, which is inspired by a pin-wheel.

Neel Bagh has a pool of water lilies, surrounded by pergolas covered with climbing plants. You can hearsound of hundreds of ceramic chimes when the breeze blows.

The Colour Gardens are dotted with flowering shrubs and ground covers. The courts of specimen plants display rare species of plants like bamboo or cactus, or herbs.

The Solar Energy Park was created to promote solar energy. It is an effort to educate the people about how solar energy works and what it can be used for. The park features vehicles and other items that are fully functional and powered with solar energy. They do not emit pollutants or other environment-harming materials.

Then there is the amphitheatre with blocks of sandstone as seats. The garden has an open exhibition area for art displays and workshops.

The garden has about 25 sculptures and murals.

The Garden of Five Senses reflects the architecture of the ancient city including the stones used in the constructions of boundary walls and dome shaped office complex.

Been to Garden of Five Senses ? Share your experiences!

Place people like to go after Garden of Five Senses