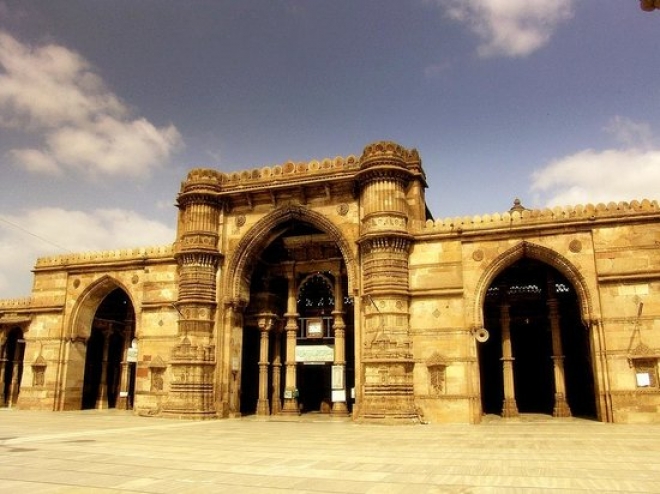 The walled city of Ahmedabad, founded by Sultan Ahmad Shah I in the 15th century, on the eastern bank of the Sabarmati River, presents a rich architectural heritage from the Sultanate period, notably the Bhadra citadel, the walls and gates of the Fort city and numerous mosques and tombs as well as important Hindu and Jain temples of later periods. The urban fabric is made up of densely-packed traditional houses (pols) in gated traditional streets (puras) with characteristic features such as bird feeders, public wells, and religious institutions. The city continued to flourish as the capital of the State of Gujarat for six centuries, up to the present.

Ahmedabad, in western India, is the largest city in the state of Gujarat. The Sabarmati River runs through its center. On the western bank is the Gandhi Ashram at Sabarmati, which displays the spiritual leader’s living quarters and artefacts. Across the river, the Calico Museum of Textiles, once a cloth merchant's mansion, has a significant collection of antique and modern fabrics.

Been to Historic City of Ahmedabad ? Share your experiences!