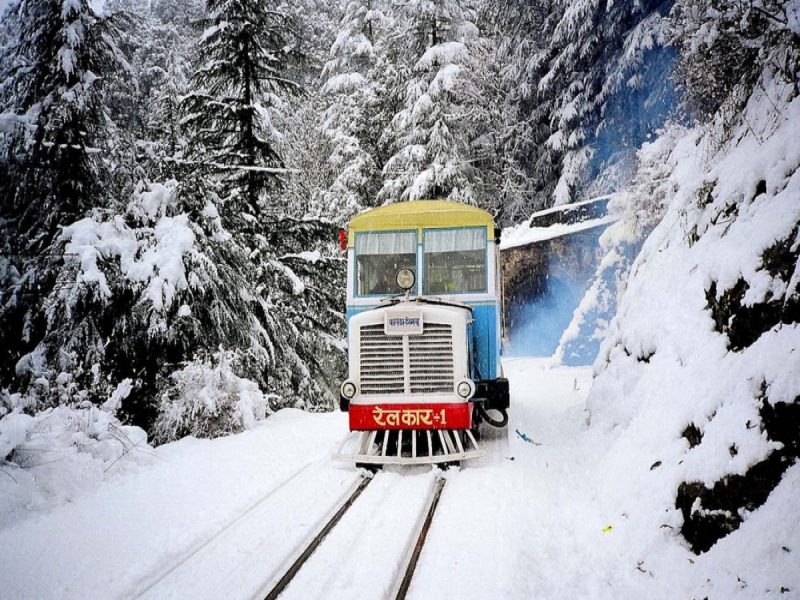 Be it for a short or a long distance, the train rides are always enjoyable. When normal train journeys can be so exciting, the toy train rides are just like the one from the fantasy world! The Kalka to Shimla toy train is one such journey that'll be glued to your memory for a long time.

The Kalka-Shimla Toy Train is a narrow gauge railway which goes through the picturesque hilly regions from Haryana's Kalka to the earlier summer capital Shimla. It is surely exciting to travel to mountain railways. The scenic landscapes that engulf the journey will be glued to your memory for a long time.

British made Shimla their summer capital after the First Anglo-Gurkha War. It soon became the headquarters of the British army. Earlier, bullock carts were used for transportation. So, the British began the construction of broad gauge Dehli-Kalka line and 1903 it was opened by Lord Curzon.

The most exciting part of this train route is that it passes through 102 tunnels. One of those tunnels is the haunted Barog tunnel. There are also 864 bridges which come on this trail. Barog tunnel is popular for being a most haunted destination. The Barog is the longest tunnel in the journey and is believed to be haunted.

The Himachal Pradesh Government made this mountain railway as a heritage site in 2007. In 2008, it was awarded the status of UNESCO World Heritage Site under Mountain Railways of India. Kalka to Shimla Toy Train is a world heritage site along with Darjeeling Himalayan Railway, Nilgiri Mountain Railway and Chhatrapati Shivaji Terminus.

We would have seen this Kalka-Shimla train in several India films. In recent times, in the Hindi movie "Jab We Met" this train played an important role. Another interesting part of this train is that of 'Shivalik Queen' (coach). This coach is special because it is only for honeymoon couples. So the newlyweds can enjoy nature as well as get some privacy for their romance in this journey.

Station on this route

Kalka is a town in Haryana which gets its name from the presiding deity Goddess Kali. The Kalka to Shimla toy train starts from this town. The Distance The total distance of the journey is 96km and it takes around 5 hours to reach Shimla. The train runs at a slow speed as it goes through hilly stretches.

Dharampur is a small town which is the 2nd stop after leaving Kalka in this toy train route. Dharampur is around 10km to Kasauli.

Barog is a small hill station and it is named after the architect Colonel Barog built this railway track and tunnel. However, Barog didn't construct it properly and was fined by the British Government. So, he is said to have committed suicide in this tunnel.

The Kalka to Shimla toy train enters Solan after Dharampur. Solan is one of the prominent places in this train journey. It is a district which is named after the presiding deity Shoolini Devi. Solan is also called as 'Mini Shimla'.

Salogra is a village is Solan and it is at a distance of 40km from Shimla. Salogra comes in the route of Kalka-Shimla toy train.

Kandaghat is reached after Sholan. It is a town from which the road route turns to the famous Chail.

Taradevi is a small hill station on the way to Shimla. The picturesque landscapes surrounding this place is just a visual treat. Tara Devi is famous for Tara Devi Goddess Temple.

Totu is a fast developing suburb in Shimla. The toy train passes through Totu which houses Jutogh Railway Station on the way to Shimla.

Summer Hill is a small hill town in the outskirts of Shimla. The Summer Hill stop comes just before reaching Shimla in the toy train route.

Shimla is the capital city of Himachal Pradesh. Once the summer capital of the British, it now serves as the most famous summer destination in India. The journey through Kalka to Shimla toy train ride is one of the prominent toy trains in India. It is a must to travel through this enchanting route at least once.

Been to Kalka-Shimla Toy Train Ride ? Share your experiences!