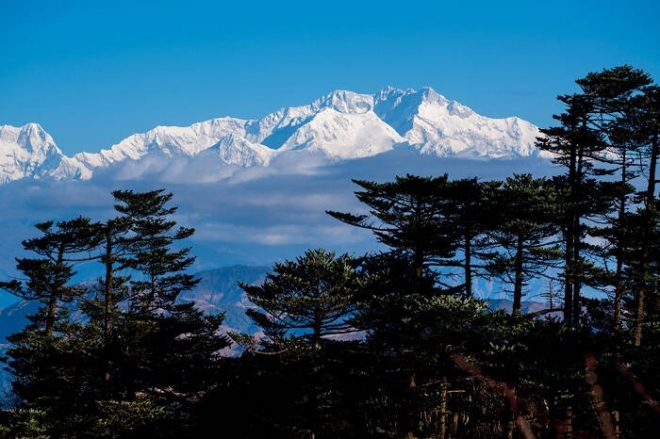 Located at the heart of the Himalayan range in northern India (State of Sikkim), the Khangchendzonga National Park includes a unique diversity of plains, valleys, lakes, glaciers and spectacular, snow-capped mountains covered with ancient forests, including the world's third highest peak, Mount Khangchendzonga.

The Khangchendzonga National Park, a lesser-known destination in Sikkim, has been added in a World Heritage Site by UNESCO in 2016. This is for the first time that any Indian destination has been under the Mixed criteria of UNESCO's heritage sites list, thus recognising the outstanding universal values for its both natural and cultural significance.

Located at the heart of the Himalayan range in Sikkim, the Park is home to dozens of lofty mountain peaks, 18 glaciers, lakes, waterfalls and some unique flora and fauna.

A favourite among trekkers, this place has a unique biodiversity that includes an interesting mix of wildlife species and the presence of plains, valleys, lakes, glaciers and spectacular, snow-capped mountains covered with ancient forests, including the world's third highest peak, Mount Khangchendzonga.

Besides, the National Park is highly regarded by the state's local population because of several mythological stories that are associated with the caves, rivers, lakes, forests and other natural elements in this place. The UNESCO designation not only adds prestige to the park but also entitles it to finance from the World Heritage Fund.

"The UNESCO recognition will give a further push to eco-tourism in our state, while also helping us to regulate the high influx of visitors to more popular destinations with only a minimal negative impact of tourism," said Sikkim Chief Minister Pawan Kumar Chamling.

What is also unique about its eco-system is that it has permanently snowcapped mountains, glaciers, high altitude lakes, grasslands, cold deserts and varied forest types. Consequently, the flora and fauna is also diverse and a delight for visitors.

The park also has religious significance. Sikkim is presented in Buddhism as a "hidden land" and as per scriptures, what now constitutes the park is the sanctum sanctorum, where religious masters have hidden religious texts and treatises marked for discovery in later times.