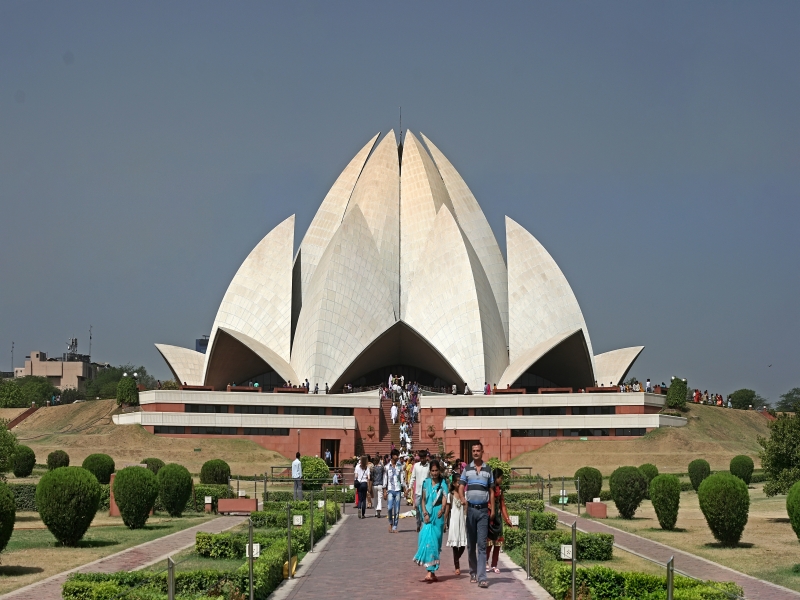 If there is a destination of universal worship no matter what religion you come from, if there is one place that speaks of unconditional love and everyone being one in the eyes of God it is the Lotus Temple or the Bahai House of Worship. Completed in 1986, this unique house of worship is known for its beautiful flowerlike structure and shape, over the years it has become one of the main attractions of the city and is also the Mother temple in India.

The Bahai temple or the Lotus temple has also been featured in numerous magazines and has even won various awards on its architecture. The temple has gained popularity among the community of artists, architects, governments, religions and even tourists. Though a temple, the distinguishing feature of the Bahai house is that it is open to all irrespective of caste, creed, religion and gender. It is with the belief that the soul of any worship place is strengthened when people of all faiths worship god in one place without any form of restrictions.

Following the Bahai Law, the Lotus Temple allows only the scriptures of any faith can be read or chanted in whatever language one chooses, and also even if prayers can be set to music by choirs, one cannot play any form of musical instrument inside. Another unique feature of this temple is that there no ceremonial or ritualistic practices performed here, nor is any sermons delivered.

Like all other Bahai houses of worship the Lotus Temple too shares a few elements of architecture that are specified in the Bahai scriptures. It is said that the son of the founder of the religion Abdul Baha stated that the main architectural feature of the house would be a nine sided circular shape. However, the dome isn’t considered to be an essential part of the architecture though every Bahai house of worship has a dome. Also, according to the scriptures there are no statues, images or sculptures inside the House of Worship. There are no altars or pulpits within any Bahai House of Worship.

With a beautiful lotus like shape, the Lotus temple is made of 27 free standing marble petals that are arranged in unique clusters of 3 thus forming 9 sides. There are 9 doors to the temple which open to a more than 40 metres tall central hall. This hall is believed to be able to accommodate over 2500 people. It is said that the very same white marble from Penteli Mountain, Greece that has been used to make numerous ancient monuments and other Bahai Houses has been used here. The complete property of the Lotus Temple is of 26 acres, which consists of 9 ponds and numerous gardens.

The architect of the famous Lotus temple was Fariborz Sahba, an Iranian who currently lives in Canada. In 1976 he was approached to design the temple, he later oversaw the construction duties as well. It is said that a huge amount of the funds for the selection and buying of the plot was donated by Ardishir Rustampur. It is said that he gave his entire life savings for the construction of this magnificent temple.