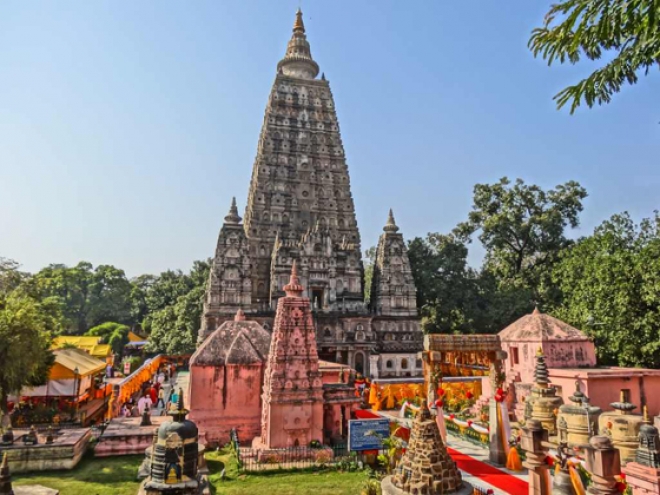 The Mahabodhi Temple (literally: "Great Awakening Temple"), a UNESCO World Heritage Site, is an ancient, but much rebuilt and restored, Buddhist temple in Bodh Gaya, marking the location where the Buddha is said to have attained enlightenment. Bodh Gaya (in Gaya district) is about 96 km (60 mi) from Patna, Bihar state, India.

The site contains a descendant of the Bodhi Tree under which Buddha gained enlightenment, and has been a major pilgrimage destination for Hindus and Buddhists for well over two thousand years, and some elements probably date to the period of Ashoka (died c.232 BCE). What is now visible on the ground essentially dates from the 7th century CE, or perhaps somewhat earlier, as well as several major restorations since the 19th century. But the structure now may well incorporate large parts of earlier work, possibly from the 2nd or 3rd century CE.

Many of the oldest sculptural elements have been moved to the museum beside the temple, and some, such as the carved stone railing wall around the main structure, have been replaced by replicas. The main temple's survival is especially impressive, as it was mostly made of brick covered with stucco, materials that are much less durable than stone. But this means that very little of the original sculptural decoration has survived.

The temple complex includes two large straight-sided shikhara towers, the largest over 55 metres (180 feet) high. This is a stylistic feature that has continued in Jain and Hindu temples to the present day, and influenced Buddhist architecture in other countries, in forms like the pagoda.