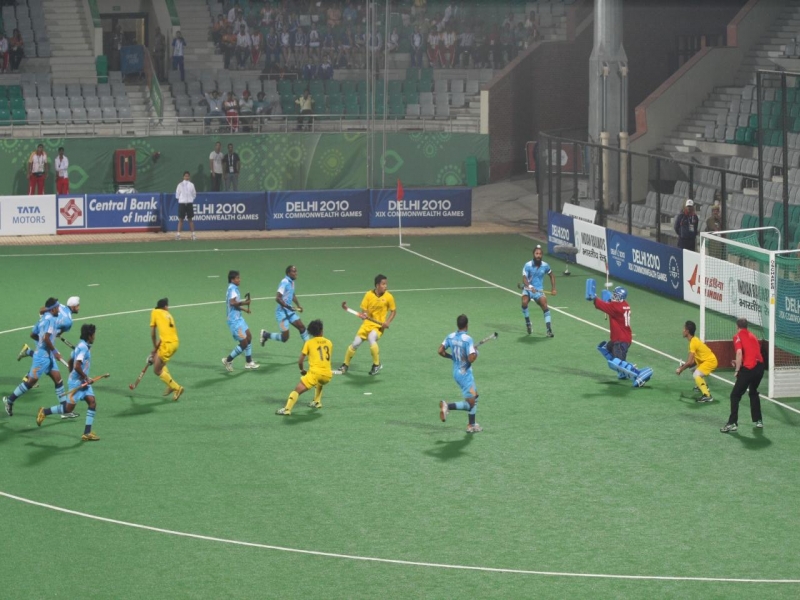 The stadium was built in 1933 as a gift for Delhi from the Maharaja of Bhavnagar, it was originally multipurpose stadium and named the Irwin Amphitheatre. It was designed by Anthony S. DeMillo and opened by Lord Willingdon. As per the original plans of architect of New Delhi Edwin Lutyens there was to be garden at the site, to provide a clear view of the historic Purana Quila (Old Fort) in the backdrop, as it lay perpendicular to the axis beginning from Rashtrapati Bhavan (President's House) through Rajpath and ending at the India Gate, his plans were however overruled. It was renamed National Stadium before the 1951 Asian Games, Dhyan Chand's name was added in 2002.

The stadium is spread over 17,500 square metres in the 37-acre complex. It has three synthetic pitches — two conform to international standards and a third is for practice. It is located adjacent to the Indian Coast Guard Headquarters.

A new polygrass turf was laid on all pitches equipped with new sprinkler systems. The main field has a capacity to seat about 16,200 spectators. The second pitch outside the main arena has 900 permanent seats and with a provision of 1,600 temporary seats. The two competitive pitches are flood-lit with foldable floodlight towers (hinged mast lights) which will provide 2,200 lux illumination during the competition. This will enable high definition TV transmission.

Both the pitches are equipped with facilities for the players like change rooms, relaxation lounges and a VVIP lounge.

The stadium is air-conditioned and fitted with lifts. There are barrier free provisions for athletes and spectators who are physically challenged. The stadium will get its power supply from two grids with a backup based on generator sets and battery uninterrupted power supply.

Been to Major Dhyan Chand National Stadium ? Share your experiences!