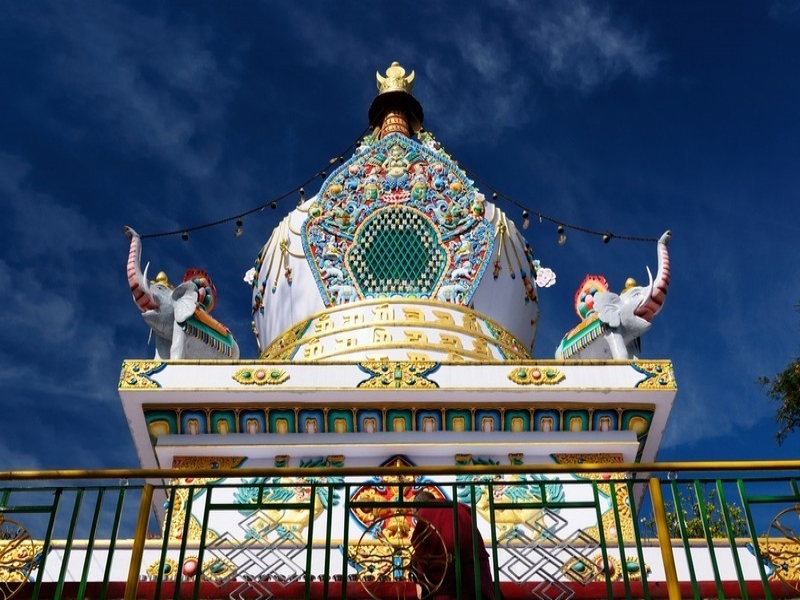 A Stupa is a hemispherical structure mostly used as a place of meditation and contains relics (typically of Buddhist monks or nuns). The Namgyalma Stupa is located in the heart of Mcleod Ganj i.e. the city center. It is a dome-shaped construction holding a huge shrine of Sakyamuni Buddha- the statue of which is enshrined in a small chamber. Many Tibetan soldiers fought bravely in Tibet’s freedom struggle. As a mark of respect to those great souls, this sandstone structure was erected. The architecture dates back to the 3rd century, much in resemblance to architectural styles adopted during the reign of King Ashoka. Tibetans believe that anything that happens to fall on this Stupa gets purified and anybody who visits it is cleared of all bad Karma. Some even believe that rainwater that falls touching the Stupa is pious. A number of prayer wheels surround the stupa. Devotees who visit the Namgaylma stupa are seen turning the prayer wheel while chanting mantras. This can be done anytime as the place remains open for the most of the day. Speaking with locals and interacting with the monks is a great way to gain about Tibetan culture, their trusted faiths, and mode of prayer. In all, a visit to the Namgaylma Stupa will prove a fruitful one as you will feel soothed by the holy environment and know about Tibetan traditions that seem to have been embedded into every inch of its construction.