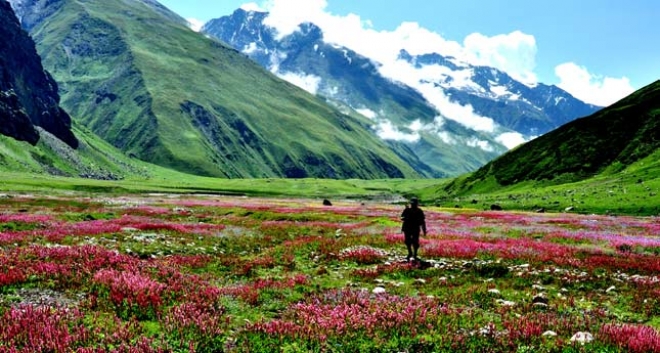 The Nanda Devi and Valley of Flowers National Parks are nestled high in West Himalaya. Valley of Flowers National Park is renowned for its meadows of endemic alpine flowers and outstanding natural beauty. It is located in the Garhwal Himalaya of Chamoli District of Uttarakhand. This richly diverse area is also home to rare and endangered animals, including the Asiatic black bear, snow leopard, brown bear and blue sheep. The gentle landscape of the Valley of Flowers National Park complements the rugged mountain wilderness of Nanda Devi National Park. Together, they encompass a unique transition zone between the mountain ranges of the Zanskar and Great Himalaya. The park stretches over an expanse of 87.5 km2 (33.8 sq mi). It was established as a national park on November 6, 1982. However, it was initially established as a game sanctuary on January 7, 1939. It was inscribed under the UNESCO World Heritage List in 1988 with extension in 2005 under category (vii) and (x).[43][44] Together, they comprise the Nanda Devi Biosphere Reserve, which is on the UNESCO World Network of Biosphere Reserves since 2004.

Been to Nanda Devi and Valley of Flowers National Parks ? Share your experiences!