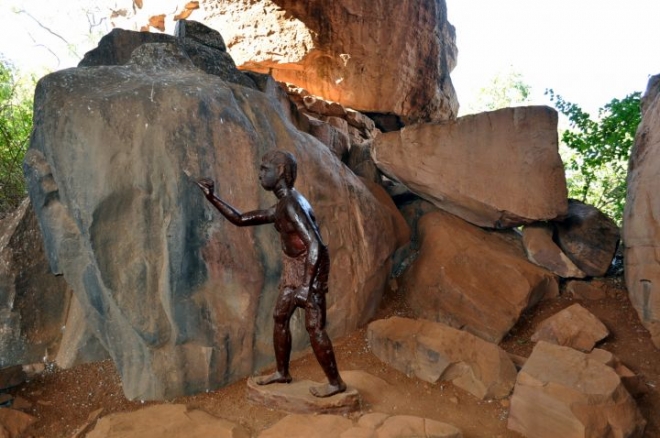 The Rock Shelters of Bhimbetka described in the UNESCO Inscription as "the site complex … a magnificent repository of rock paintings within natural rock shelters" is located in the foothills of the Vindhya range of hills in the Central Indian state of Madhya Pradesh. It is spread in sandstone formations extending over an area of 1893 ha with a buffer zone 10,280 hectares (25,400 acres). The rock shelters, discovered only in 1957, comprise a group of "five clusters of rock shelters" with paintings that are inferred to date from the "Mesolithic period right through to the Historical period", with the 21 villages surrounding them reflecting the traditions displayed in the rock paintings. The unique rock art has been discovered in 400 painted shelters spread over an area of 1,892 ha amidst the dense forest with a high diversity of flora and fauna, with some of the shelters dated from 100,000 BC (Late Acheulian) to 1000 AD. It was inscribed as a World Heritage Site by UNESCO in 2003 as a unique cultural property representing a convergence displayed in the art form between the people and the landscape with links to the hunting-gathering economy of the past.

Been to Rock Shelters of Bhimbetka ? Share your experiences!