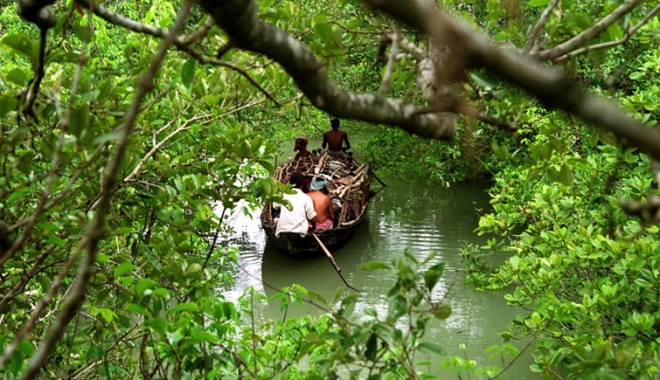 The Sundarbans National Park, the largest estuarine mangrove forest in the world is a national park, tiger reserve, World Heritage Site and a biosphere reserve located in the Sundarbans Ganges river delta bordering the Bay of Bengal, in West Bengal. It is also on the UNESCO World Network of Biosphere Reserves. The Sundarbans as a whole encompasses 10,000 km2 (3,900 sq mi) of land and water, about 5,980 km2 (2,310 sq mi) in Bangladesh and the balance is in India. It is integral to the world's largest delta of 80,000 km2 formed from sediments deposited by the three great rivers, the Ganges, the Brahmaputra and the Meghna, which confluence in the Bengal Basin. The entire basin is traversed by a complex network of interconnecting waterways. Though the history of protection in the area of the Indian part of the Sundarbans dates back to 1878, it was declared as the core area of Sundarbans Tiger Reserve in 1973, and a wildlife sanctuary in 1977 of 133,000-hectare core area within the 258,500 hectares (639,000 acres) Sundarbans Tiger Reserve. On May 4, 1984, it was declared a National Park. It was inscribed on the UNESCO World Heritage list in 1987 as a natural property under category (ix) and (x). This region is densely covered by mangrove forests and is one of the largest reserves for the Bengal tiger. It is also home to a variety of bird, reptile and invertebrate species, including the salt-water crocodile.