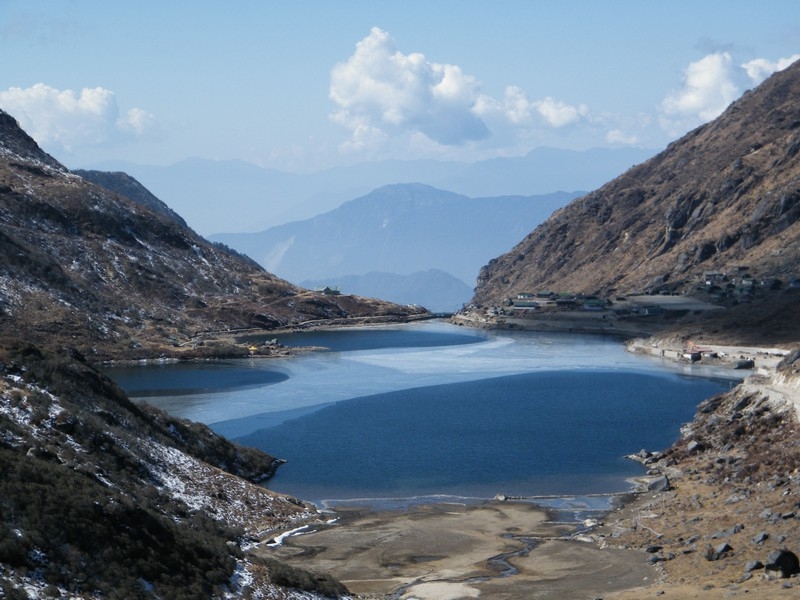 Tsomgo Lake, also known as Tsongmo Lake or Changu Lake, is a glacial lake in the East Sikkim district of the Indian state of Sikkim, some 40 kilometres (25 mi) from the capital Gangtok. Located at an elevation of 3,753 m (12,313 ft), the lake remains frozen during the winter season. The lake surface reflects different colours with change of seasons and is held in great reverence by the local Sikkimese people. Buddhist monks prognosticated after studying the changing colours of the lake.

In Bhutia language the name Tsomgo is made of two words 'Tso' meaning "lake" and 'Mgo' meaning "head" which gives the literal meaning as "source of the lake".

The lake is surrounded by steep mountains which are covered with snow during winter. During summer the snow cover melts and forms the source for the lake. The lake which remains frozen in winter season, sometimes extending up to May, receives an average annual precipitation of 1,183 millimetres (46.6 in) with temperatures recorded in the range of 0–25 °C (32–77 °F).

The lake is about 40 kilometres (25 mi) away from Gangtok on the Gangtok-Nathula highway. Further, the road to Nathu La skirts the lake on the north side. The Chinese border crossing is only some 5 kilometres (3.1 mi) east-northeast in a straight line, but some 18 kilometres (11 mi) by road.