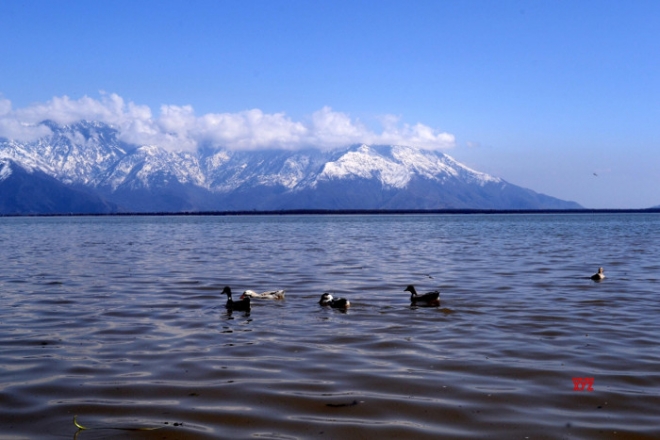 Wular Lake or Wullar is one of the largest fresh water lakes in Asia. It is sited in Bandipora district in the Indian state of Jammu and Kashmir. The lake basin was formed as a result of tectonic activity and is fed by the Jhelum River. The lake's size varies seasonally from 12 to 100 square miles (30 to 260 square kilometers). In addition, much of the lake has been drained as a result of willow plantations being built on the shore in the 1950s.

In ancient times, Wular Lake was also called Mahapadmasar. Nilamata Purana also mentions it as Mahapadmasaras. Mahapadmasar is referred as Bolor by Al-Biruni {960–1031 AD}. The lake, with its big dimensions and the extent of water, gives rise to high leaping waves in the afternoons, called Ullola in Sanskrit, meaning "stormy leaping, high rising waves". Therefore, it was also being called Ullola. Its corrupted form saw its transition as Bolor by Al-Biruni and over the centuries corrupted further to Wulor or Wular. The origin may also be attributed to a Kashmiri word 'Wul', which means a gap or a fissure, appellation that must have come also during this period. The word Wul, is also indicator of its origin to a fissure or gap created.