Chennai; also known as Madras (the official name until 1996) is the capital of the Indian state of Tamil Nadu. Located on the Coromandel Coast off the Bay of Bengal, it is the biggest cultural, economic and educational centre of south India. According to the 2011 Indian census, it is the sixth-most populous city and fourth-most populous urban agglomeration in India. The city together with the adjoining regions constitutes the Chennai Metropolitan Area, which is the 36th-largest urban area by population in the world. Chennai is among the most-visited Indian cities by foreign tourists. It was ranked the 43rd-most visited city in the world for the year 2015. The Quality of Living Survey rated Chennai as the safest city in India. Chennai attracts 45 percent of health tourists visiting India and 30 to 40 percent of domestic health tourists. As such, it is termed "India's health capital". As a growing metropolitan city in a developing country, Chennai confronts substantial pollution and other logistical and socio-economic problems.

Stone age implements have been found near Pallavaram in Chennai. According to the Archaeological Survey of India (ASI), Pallavaram was a megalithic cultural establishment, and pre-historic communities resided in the settlement.

The region around Chennai has served as an important administrative, military, and economic centre for many centuries. During the 1st century CE, a poet and weaver named Thiruvalluvar lived in the town of Mylapore (a neighbourhood of present Chennai). From the 1st–12th century the region of present Tamil Nadu and parts of South India was ruled by the Cholas.

The Pallavas of Kanchi built the areas of Mahabalipuram and Pallavaram during the reign of Mahendravarman I. They also defeated several kingdoms including the Cheras, Cholas and Pandyas who ruled over the area before their arrival. Sculpted caves and paintings have been identified from that period. Ancient coins dating to around 500 BC have also been unearthed from the city and its surrounding areas. A portion of these findings belonged to the Vijayanagara Empire, which ruled the region during the medieval period. 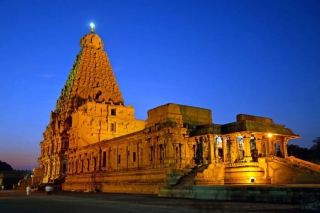 The Great Living Chola Temples, built by kings of the Chola Empire stretched ...

In and Around Chennai

Chennai is home to several malls, due to its status as an IT hub. Major ones include Express Avenue (EA), Citi Centre, Abirami mega mall, Spencer Plaza, Ampa Skywalk, Phoenix Market City and Forum Vijaya Mall. Chennai is an important gold market in India contributing to 45 percent of the 800-tonne annual national gold uptake. The city is also the base to the World Gold Council's India operations. The city's retail industry is majorly concentrated in T. Nagar which accounts for major share jewellery and clothes sold in Chennai. According to the 2012 report by property consultant Cushman & Wakefield, Main Streets Across the World, Khader Nawaz Khan Road at Nungambakkam ranked 10th position in the list of 'Top 10 Global Highest Retail Rental Growth Markets 2012', with 36.7 percent jump in rents.