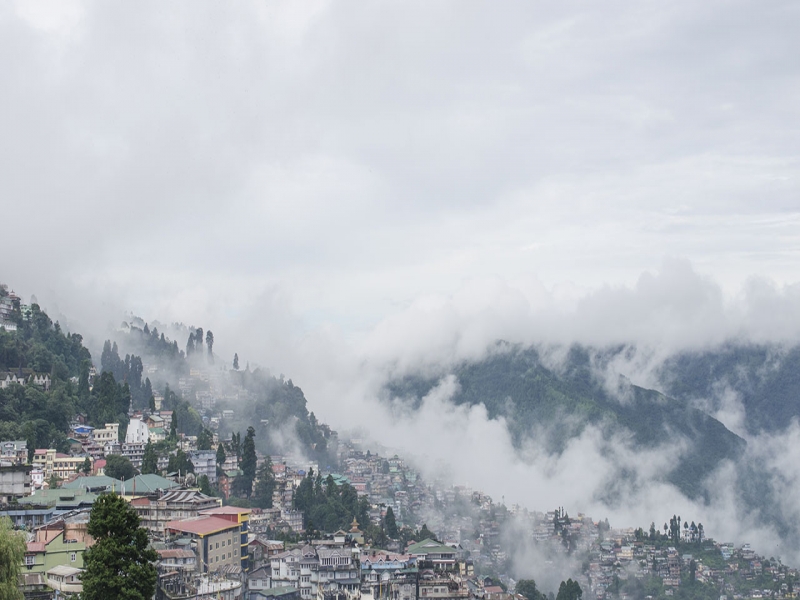 Darjeeling is a city and a municipality in the Indian state of West Bengal. It is located in the Lesser Himalayas at an elevation of 6,700 ft (2,042.2 m). It is noted for its tea industry, its views of Kangchenjunga, the world's third-highest mountain, and the Darjeeling Himalayan Railway, a UNESCO World Heritage Site. Darjeeling is the headquarters of the Darjeeling District which has a partially autonomous status within the state of West Bengal. It is also a popular tourist destination in India.

The recorded history of the town starts from the early 19th century when the colonial administration under the British Raj set up a sanatorium and a military depot in the region. Subsequently, extensive tea plantations were established in the region and tea growers developed hybrids of black tea and created new fermentation techniques. The resultant distinctive Darjeeling tea is internationally recognised and ranks among the most popular black teas in the world. The Darjeeling Himalayan Railway connects the town with the plains and has some of the few steam locomotives still in service in India.

Darjeeling has several British-style public schools, which attract pupils from all over India and a few neighbouring countries. The varied culture of the town reflects its diverse demographic milieu comprising Lepcha, Khampa, Gorkha, Newar, Sherpa, Bhutia, Bengali and another mainland Indian ethnolinguistic groups. Darjeeling, alongside its neighbouring town of Kalimpong, was the centre of the Gorkhaland movement in the 1980s and the summer of 2017.

In and Around Darjeeling

Tourist inflow into Darjeeling had been affected by the political instability in the region, and agitations in the 1980s and 2000s hit the tourism industry hard. However, since 2012, Darjeeling has once again witnessed a steady inflow of both domestic and international tourists. Presently, around 50,000 foreign and 500,000 domestic tourists visit Darjeeling each year, and its repute as the "Queen of the Hills" remains unaltered. According to an India Today survey published on 23 December 2015, Darjeeling is the third most Googled travel destination among all the tourist destinations in India. Even though there are political instabilities in Darjeeling, its tourism rate is increasing year by year. Many visits this place for food specialities like momos, steamed stick rice, and mostly steamed foods are famous in this region. Many tourists visit this place for seeing the natural beauty of nature.