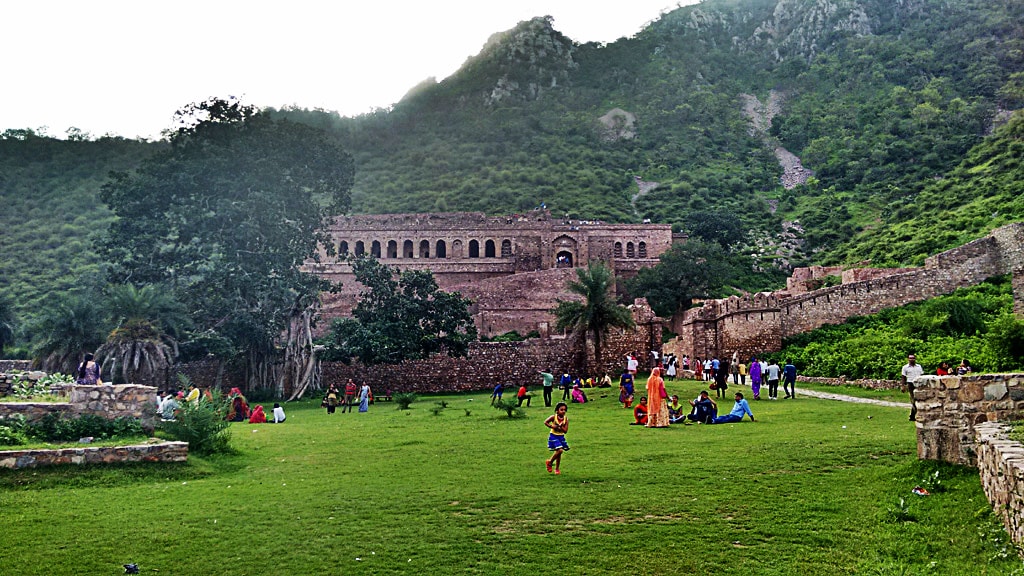 Bhangarh Fort is situated on a hillside in the deserted town of Bhangarh, Rajasthan. Bhangarh is a ruined town between Jaipur and Alwar in Rajasthan and is located at the edge of Sariska Tiger Reserve. Bhangarh fort is a major tourist attraction and is said to be one of the most haunted sites in the world. Many legends are associated with the haunted folk.

On Sunday morning, we (Amardeep, Mayank, Pradeep, Rajdeep, Anil and Deepak) decided to go Bhangarh Fort. We left Bandikui (Dausa) in the morning around 8:00 AM and reached Bhangarh fort around 12:00 PM. We were in the own car and took a couple of stoppage in between for tea. We first decided to go towards Narayani Mata, Sarsa Mata temple and then Bhangarh Fort. After visiting temple, we went to the fort. Bhangarh fort is one of the oldest forts in India; the look of the fort is very good and it is one of the best location for photo shoots. It was established in 1613 by King Madho Singh. It might be renowned for its haunted and spooky presence, but it can be visited as the place is beautiful and tranquil. The lush green grass in the fort and its adjoining area surprised us. It did not at all seem like a place in the desert state of Rajasthan. There were many local tourists who came in groups, mostly youngsters. As we entered we found a Hanuman temple right next to the main gate. The sprawling premises has more than half a dozen temples: Hanuman Temple, Gopinath Temple, Someshwar Temple, Keshav Rai Temple, Mangla Devi Temple, Ganesh Temple and Naveen Temple and a very strategically positioned Purohitji-ki-Haveli. It left us wondering how ghosts stay in premises where there are so many temples! A young tourist, Anurag Gupta, who was in a group of 10, said: "We all have come to see Bhoot-Bungla (the fort of the ghosts)! We have heard about this place a lot and hence thought of coming once."

As we entered, we saw a Dancer's Haveli and Johari Bazar. All dilapidated now, but locals say paranormal activities are observed in these places at night. Further, down the sprawling expanse of the fort was the Gopinath Temple, crossing which we reached the Royal Palace. It is located at the farthest end of the fort area. There are many myths about the place. It is believed that the entire township was obliterated in a day. But no written evidence has been found to date.

Against the backdrop of the Royal Palace stands the Aravalli Range. Bisram Nath, who works in the Someshwar Temple said at times wild animals come down from the mountain ranges at night. "A few families like ours stay within the premise. We stay near the Ganesh Temple. The biggest problem is that the area does not have electricity." Standing on the terrace of the Royal Palace one can view the vast expanse of the fort. It has four gates-Lahori Gate, Ajmeri Gate, Phulbari Gate and Delhi Gate. It seems life has come to a standstill in this area. Like all other tourists, we also left the place before sunset. So, are you still pondering about a trip to Bhangarh, ranked amongst top haunted places in India & Asia? If you think that you are daring enough to challenge the paranormal beings and want to explore this haunted place then pack your bags and plan a visit to Bhangarh Fort in Rajasthan. Bhangarh fort story is the legend of the Princess of Bhangarh, Ratnavati. She was said to be very beautiful and by the age of 18 she started getting matrimonial offers from nobilities of other states. Now, in the same area lived a Tantrik (a magician well versed in the occult), called Singhia who was completely smitten by her, but knew that the match was impossible. One day Singhia saw the princess's maid in the market. So, he thought of tricking the princess by using black magic on the oil that the maid was purchasing so that upon touching it, the princess would surrender herself to him. The princess had, however, seen the Tantrik enchanting the oil, foiled his plan by pouring it on the ground. As the oil struck the ground it turned into a boulder, which crushed Singhia. Before dying, Singhia cursed the palace with the death of all who dwelt in it, without any rebirth in their destinies. The very next year, a battle took place between Bhangarh and Ajabgarh in which Princess Ratnavati perished. According to the legends, there are ghosts dwelling in Bhangarh fort and that is why entry is prohibited for tourists in the fort after sunset and before sunrise. The locals believe that Princess Ratnavati has taken birth somewhere else and that the fort and the empire of Bhangarh is waiting for her return and put an end to the curse. A few years ago, the crew members of production team of a haunted T.V. Serial , which is televised on national television visited the place of Bhangarh after searching for an ideal location for shooting the haunted story. Even they witnessed some paranormal activities happening there.