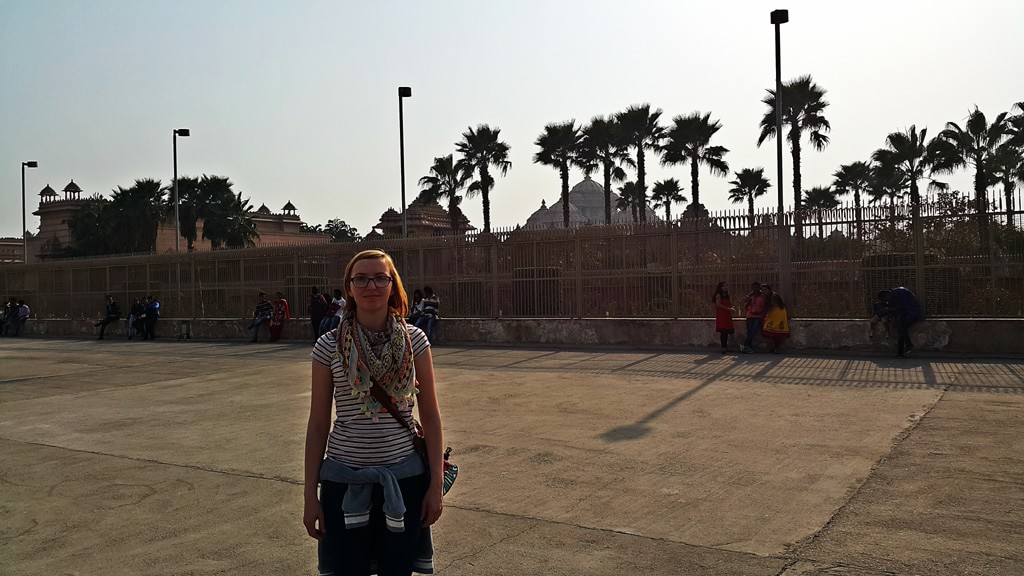 Hey, Friends, I am here with my new experience and off course new splendor tour with my roommates and one of my friends called Kaja Pustomlesk (she belongs from Slovenia). She just came to attend my wedding. She came before my wedding to cover India as much as she can. On 14-Feb 2015 around 3:00 AM, I and Subahsis Saha were waiting for her at IGI Airport New Delhi. The flight had been landed at 2:50 AM, but immigration process had not been done yet. So, we met with her around 5:00 AM (She was very excited and happy). We came back to my flat and taken few hours of rest.

Around 10 AM, we were ready to visit Akshardham Temple. We (me, Kaja and Subahsis) went Dwarka sector-21 metro station and caught the metro for Akshardham. She was saying that how fancy is it (she was talking about Delhi Metro). After 1.5 hours, we were at Akshardham temple. We had submitted all the things (mobiles, bags, and camera) to store room because you cannot carry these things inside temple premises. Entry was free for all visitors, but they wrote her name and country name for record purpose. This was my second-time visit at Akshardham Temple, but Kaja was excited about this visits. Akshardham is one of the biggest Hindu temples in the world with beautiful architecture.

Apart from temple, we had seen Garden of India (Sixty acres of lush lawns, gardens and exquisite bronze statues of India's child gems, valorous warriors, national figures and great women personalities inspire visitors with values and national pride.), Hall of Values (Universal values for mankind presented through audio-animatronics and light and sound diorama presentations from the life of Bhagwan Swaminarayan ), Giant Screen Film (A giant screen film presentation on an 85'x65' screen that vividly portrays an 11-year-old child yogi's epic pilgrimage of India), Boat Ride (A 12-minute fascinating boat ride experience of 10,000 years of India's glorious heritage. Learn about the discoveries and inventions of the Rishi-scientists of India, see the world's first university of Takshashila and sail through the caves of Ajanta-Ellora.). It was amazing experience; we just captured all the images in our eyes because they don't allow any photography.

After exploring the temple, we went food court which was inside temple premises to enjoy the meal. It was reasonable; normal people can afford price and food were also very good. Kaja also wants to try the Indian flavors, so we ordered Masala Dosa, Amritsari Kulche, Paratha and Khaman Dhokla. Indian food is incomplete without desserts, so I ordered Rasgullah, Kala Jamun, and Milk Cake. Now our stomach was full with delicious food. After lunch, we had collected our goods from the store and captured some photographs of Akshardham temple from outside. Next destination was Lotus temple, so we hired cab of Rs 110 from Akshardham metro station to Lotus temple. We reached around 4:30 PM; the temple was looking superb in the evening. There was also free entry, so we easily entered in the temple. There was a beautiful lush green garden with a lot of bushes and fruit plants. Temple was looking more beautiful because of sunset, so we captured a lot of pictures. Lotus temple is for all god followers who believe that 'God is one', this temple has won numerous architectural awards and have been featured in hundreds of newspaper and magazine articles. We were lucky because we entered inside the temple around 5:00 PM (that time was prayer time). Player was started in English then Urdu and ends with the Hindi language. This was the different experience for us. Many of the people requesting to capture a photo with Kaja. She said to me that here I am feeling like a celebrity; why they want to click pictures with me. I told just ask them and also said that you are our guest and foreigner too, so everyone wants to capture pictures with you. We also enjoyed the taste of coconut water outside the temple premises. Today, we covered only two places, but we enjoyed a lot. It was really a wonderful day which we never forget.

On 15-Feb 2015 in the morning, the weather was pleasant and sunny. We had taken Samosa and carrot juice in breakfast. Today we were four people (me, Anoop Singh, Kaja, and Subahsis). We decided to go Red Fort first, so we caught the DTC bus (actually Kaja wanted to travel in Bus). There was no traffic on the road because of Sunday and another reason was "India Vs Pakistan" world cup match. After one hour, we reached Dariyaganj and Red Fort entry gate was just 200 meter from there. So, we left the bus and started walking; Kaja was capturing a lot of photographs of the crowd during walking. There was a separate line of Indian and foreign tourist. Indian queue was huge, so I sent Kaja to collect tickets because there was no rush in the foreign queue. Now we had come in front of Lahori Gate. The Lahori Gate is the main gate to the Red Fort, named for its orientation towards the city of Lahore, Pakistan. There was also a small market inside the Lahori Gate called Meena Bajar. We also visited a museum which having the nice collection of photographs, documents, paintings, lithographs and objects like guns, pistols, swords, shields, badges, medals, dioramas, sculptures etc. After that, we visited all the places inside the fort like Diwan-i-Aam, Rang Mahal, Khas Mahal, Diwan-i-Khas, Hammam, Moti Masjid and Hayat Bakhsh Bagh. Time was around 3:00 PM and we got tired and hungry because of 3 hours walking inside the fort. So, we had taken the exit from Red Fort and hired a Rickshaw for Changezi Restaurant near Golcha Cinema. This restaurant is famous for delicious NonVegetarian food. I had come many times here, so I ordered Butter Chicken Special and one Changezi Special with Rumali Roti. The food was very tasty; especially Butter Chicken was awesome. After lunch, we hired a cab for India Gate. India Gate is the best place to enjoy the evening in Delhi with friends and family. We also had enjoyed the taste of Gol Gappas there. We had passed long hour here and just observed the tourist and visitor. Some were making the video; some were eating street food; some were clicking pictures; some boys were celebrating the victory of India over Pak in world cup match. Everybody was enjoying its own way and making its own memorable moment. After enjoying few hours at India Gate, we went to Central Park in Connaught Place. Here, we saw one of the largest national flags of India. We also went Palika Bajar; its famous market in New Delhi. This is an underground market located between the inner and outer circle of Connaught Place. Anoop brought shoe from there.

This was really good and unforgettable travel experience with my friends. Thanks for reading my experience. 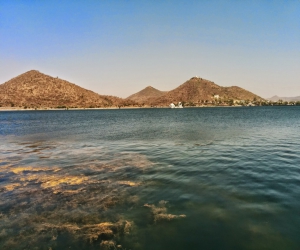 We were four friends including me and decided to meet in Udaipur. I'd booked my tatkal train ticket ...