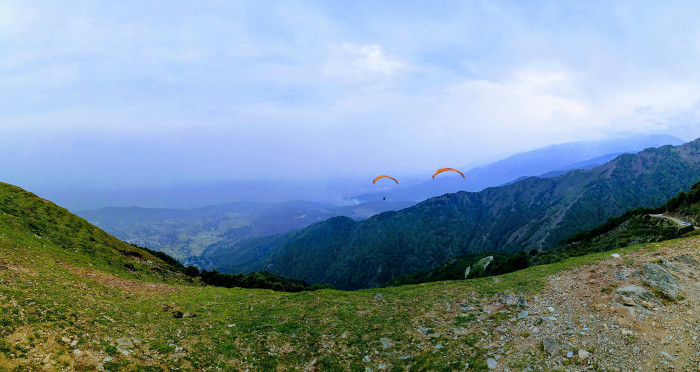 There is a beautiful village in the Barot valley, Himachal Pradesh called Meyot. This is nor a heritage village neither known for tourist attraction but I was accidentally reached there and was treated very well by the people of this village. Read further to know how I was reached there and experience something new in my life with never forgotten memory.

In May 2018, we (a group of 9 people) decided to go to Bir-Billing for an adventure trip. We booked the trip of one of the travel agent in Delhi for two days journey. We left Delhi around 9 PM from Traveller but it's got broken just after crossing the Delhi and travel agency arranged another vehicle after 2-3 hours and finally, we left Delhi around 1 AM.

Next day, we reached Bir around 1 PM, on the way, we took a break at 70 Mile Stone for dinner and another break for breakfast. We all got very tired due to the long journey. So after, bath and lunch, we took rest for an hour. After some relaxation,  we were ready for Paragliding. Out of 9 people only I had experienced paragliding in Manali and that was very easy.

After doing some formality, we boarded the Jeep to reach the flying point at Billing. The route from the Bir to Billing was in very bad condition and the driver was also driving very roughly. Finally, we completed 14 km in 20 minutes; it was an adventure itself but very scary. The time was around 5:00 PM and the wind was very gusty. We were the last group for flying; the driver asked us to wait for a few minutes for the pilot to come with all the equipment. Meanwhile, we captured some photographs and were very excited to enjoy the world’s 2nd highest paragliding spot.

I was the last person to fly at 5:30 PM; my pilot Mr. Ajay was a very experienced and good person. After flying I expand the go pro camera selfie stick for better videography as he suggested to me. The wind was very very fast and the weather got totally changed after 10 minutes. Suddenly clouds covered the whole sky and my pilot told me that we need to land immediately because if we got stuck in the black clouds then it will be impossible to land.

My pilot requested me to follow some instructions for easy landing like to tilt to Left, Right, Back or front. He was trying for landing but unfortunately, we got stuck in black clouds due to the gusty winds. Now I was feeling like the Gravity movie; we stuck somewhere where there was no end. We were unable to see anything, my go pro camera got switched off may be due to low battery or some jumps at the time of entering into the clouds. I asked my pilot for the same and he told me that brother we both were going to die and you are worrying about video recording. That was the moment, I started feeling like that 'Paragliding Guy' whom paragliding video went viral recently.

My pilot was struggling for landing but now it started raining and it was more dangerous for us. He said that if rain becomes heavier then parachute will collapse immediately. So just pray to God to stop the rain and clear the clouds because we cannot see anything except clouds. It's same as stuck in the dark big door and has no clue where is the door to go out.

It's more than one hour in the air and we were still struggling for landing. We had no idea where we were. My pilot was just flying the parachute just like any small fish lost in the ocean. Time was around 7:00 PM, we both got very tired and hopeless because the sun was going down and darkness was setting in.

Luckily, we exited from the clouds and were able to see the river and land. My pilot Mr. Ajay, without wasting any time asked me to be ready for landing. He added that it may be rough or rush landing because the surface was uneven and the river was very close. He asked me to just straighten your legs and you know it was not easy to up your legs after one and a half hours in the air. I was able to feel the pain of those poor paragliding guys.

Thanks to God and the skills of my pilot Ajay; we landed safely. We landed nearby Meyot village and approx 5-10 villagers were waiting for us and praying from God for a safe landing. They said that only God saved you from the crash otherwise we people were hopeless. The rain was now heavier and we along with 5-10 villagers waited in the small hut in their field for the rains to moderate. One lady gave her own blanket to me and started the fire because I was freezing due to cold. There was one teacher who helped us by giving his phone to contact with my group. All the members from my team were safe; one landed in the tree and another landed in the river but both were safe.

After waiting for half an hour, we trekked approx one km up to reach the Meyot village when the rain got a little slower. One of the villagers invited us for tea, food and Rum. We had Roti and Sabji made with local vegetables. After chatting with local people, we got to know that we landed approx 60 KM from Bir by road (aerial distance was approx 7 KM). They arranged a car for our drop and it takes approx three hours to reach the hotel room. I tried to pay the car owner but he politely refuses to take money. Time was around midnight when we reached the hotel. Everyone hugged me and then had dinner; I was fortunate enough to have dinner with people of the Meyot.

It was a near-death experience of my life. After this incident paragliding was stopped for a few days in Bir. After one year, everyone may forget this incident but I am always thankful for the hospitality of Meyot villagers and my pilot Mr. Ajay. Maybe you are thinking that that was a bad day for me but I'm not thinking the same, it was just a couple of bad hours in complete day and I learned a lot of lessons in my life.