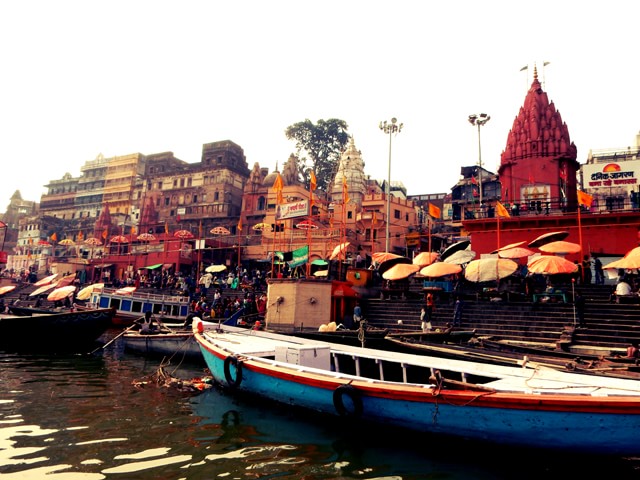 Again I was in beautiful city Varanasi for two days only. I went to attend my friend Sanjay's wedding on 7 Feb 2014, but got some time to explore Ganga's Ghat and Temples. We have booked both sides train ticket in Shiv Ganga Exp and left the Delhi on 6 Feb 2014. After whole night journey, we reached Varanasi in the morning around 8 AM.

After refreshment and breakfast, we (Vivek, Brijesh, Rohit and Gyan) went to Ganga Ghat around 11:30 AM. Ganga Ghat is approx 1.5 KM from Sanjay's home, so we decided to walk. After reaching at Ganga River, we started with Dashashwamedh Ghat (दशाश्वमेध घाट) and walked towards Assi Ghat. In between, we captured a lot of photographs and enjoy the real beauty of Banaras. Varanasi is the spiritual capital of India. It is often referred to as "the holy city of India" and "the city of Lord Shiva". Varanasi (also known as Kashi) is one of the oldest living cities in the world. English author and literature Mark Twain once wrote that

Banaras is older than history, older than tradition, older even than legend and looks twice as old as all of them put together Weather was pleasant, so this was the ideal time to enjoy the day in Banaras. This time Ganga River was also full with migratory Syberian Birds (During winters Siberian birds fly thousands of miles away from Siberia to India due to cold Arctic regions of Siberia). Therefore this place became perfect for photography and bird lover. See below video of Siberian Birds in Ganga River:

After 40 minute of walk, we hired a boat of Rs 300 for boating and to cross Ganga river. We started boating from Dashashwamedh Ghat to Manikaran Ghat and then return towards Harishchandra Ghat. We also went other side of Ganga River and halted for 15-20 minute. Boating in Ganga River is awesome part because you can see the panoramic view of Ghat (River Front) and having the more option to capture the beauty of Banaras in your camera. After two and half hour of boating, we came back to Sanjay's home around 3:30 PM and taken lunch. In the evening, we were ready to attend marriage party. Marriage party was all night and we did not take a rest.

Next day in the morning on 8 Feb 2015, we slept for 3-4 hour and then waked up around 11:30AM, but still feel sleepy. After lunch, I and Gyan ready for temple visit, but we have less time because returning train today. We decided to go only two temples. First, we visited Kal Bhairav Temple (also called Kashi ke Kotwal) and then Kashi Vishwanath Temple. Due to rush and long queue, its take 1 hour to enter in the Kashi Vishwanath Temple. After temple visit, we went to Thandai Shop and had Thandai. We also enjoyed the taste of Banarasi Paan. In the evening, we boarded the Shivaganga Exp Tran and next day reached to Delhi. I know this tour was not for traveling, but we enjoyed a lot in short period of time. You can also read my last year Banaras visit story from.