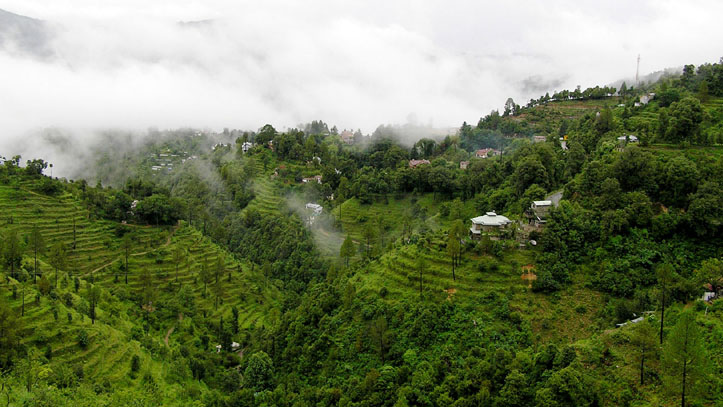 Ramgarh a place where angels stay, unelevated clouds look like the blanket of the nymph’s gown surrounding everyone to make them feel the chill of amusingness, a place where the babyhood dream to bottle in the clouds, come true. Angelic place, adroit people, a heaven are some words to construe this hill station. Ramgarh is the only hill station left in India not ruined by the hominid activity. This is the only place which shows god’s creativity in all aspect. This place comes on the way to Mukhteswar in Uttrakhand. It’s being divided into two levels malla (1500meters) and talla (1900m) means upper and lower altitude respectively. Fruits laden branches of trees and clouds covered peaks are the most captivating things to tourist which make them keep their eyes wide open to see the almighty god’s show of alchemy hence this place alias as” The fruit bowl of kumaon” also. Ramgarh is about 320 kms from Delhi via Bhowali, not much populated (3000people) like other blitz hill stations. Britishers were the first people to discover this serene hidden place to spend their lesuring time. Rare ferns and orchards are found there in abundant.

The view of Himalayans peak is so magnificent from the malla region, in the January and February tourist can see the snow loaded Himalayans peaks easily. People there share the common expression of wrinkles and irrationality, the shade of superstition has completely clutched the people mindset there as according to them –“ghosts do stay in every each corner of the mountains awry ways and they slain the adolescent damsels because the fragrance of pubescent attracts them the most, so the people there don’t even allow the girl child to go school once they enter the stage of to be mature”. People there are very addicted to tea and rum as both the liquids keeps them fresh and warm. In sweets tourist can find everything but extra boiled hot milk with the pinch of sugar above and “apple’s jalebi “is just so different.

Lion is the king of jungle but here languor can be titled as” The king of trees” as the movements of tripping on trees of these fun-loving animals are common to observe. People from cities have established their cottages there to spend their holidays in the valley of surprises as the weather there is so charlatan. Spring water is the only source of water in Ramgarh. In flora- cobra lily, ferns, apple and walnut trees are so common to find. Small colorful birds, kites, wood-pecker, sparrows are some birds which people can see casually.

Staircase agriculture is the sole way of cultivation ergo the staple mode of economy there is the business of maples export. Foodie people will not find much there to explore instead they can try some mountain food like hathmissi-roti, thupa, curd and cannabis seed raita.

A place where greenery with the curtain of calmness do exist together, a place far away from the chaotic corner of the city serve tourists with the ethereal composition by absolute being (god). Stewardship needs more to be get enhanced before raze soul invade the sphere of Eden, in Ramgarh.