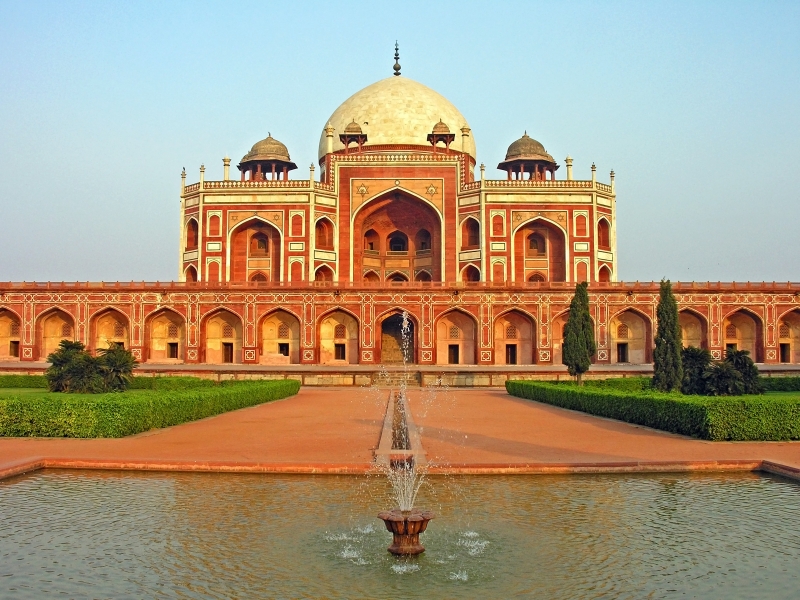 Humayun’s Tomb in New Delhi was built in 1570, 14 years after his death. It is dedicated to the second Mughal emperor of India, Humayun, who died in 1556 in an unlucky fall down a staircase. The tomb became a Unesco World Heritage site in 1993. Designed by Persian architect Mirak Mirza Ghiyath, it was commissioned by Humayun’s wife Hamida Banu Begum in 1562, and cost Rs 15 lakh.

The tomb, on the banks of Yamuna in Nizamuddin in East Delhi, is situated near the Dina-panah citadel, which is popularly known as Purana Quila (Old Fort).  The site was selected because it was near Nizamuddin Dargah, the mausoleum of Sufi saint Nizamuddin Auliya, who was revered by the rulers of Delhi. The tomb was used as refuge by Bahadur Shah Zafar and his sons during the first war of Independence in 1857.

It is inspired by Gur-e Amir, the tomb in Samarkand of Humayun’s ancestor and conqueror of Asia, Timur.  Humayun’s tomb created a precedent for Mughal architecture of royal mausoleum, which peaked with the Taj Mahal in Agra.

Constructed using rubble masonry, it is among the first structures in the Indian subcontinent to use red sandstone and white marble on such a grand scale. It has 150 graves of royal family members, including those of Hamida Begum, and Dara Shikoh, eldest son of Shah Jahan.

Besides these, there is a tomb in the enclosure that pre-dates the main tomb by twenty years. It is that of an Afghan noble in Sher Shah Suri's court, Isa Khan Niyazi.

Humayun’s Tomb and its surrounding monuments are spread over 60 acres. The other significant monuments include Afsarwala Tomb and Mosque, Arab Serai, and Bu Halima’s Tomb.

The tomb is in the middle of a large square garden. The garden is split into four parts (Charbagh) by two bisecting water channels with paved walkways, which terminate at the main gate in south, and a smaller one in the west. There is a pavilion in the centre of the eastern walls, and a bath in the centre of the northern walls.

The main tomb is in the centre of a platform, about 21 feet high. Its central dome rises 140 feet from the ground. The dome is double-layered. The outer layer supports the white marble exterior face. The inner one is characterised by the cavernous interior. The rest of the tomb is clad in red sandstone, with white marble used for ornamentation. The tomb is shaped like an irregular octagon.

Humayun’s coffin is in the central domed chamber. The vaulted chambers also contain other coffins. The sex of each body is marked by a symbol. A box of writing instruments means a male, and a writing slate resembles a female.

The mausoleum is a blend of Persian and Indian architecture. Arched alcoves, corridors and the high double dome represent the former, and kiosks, which give it a pyramidal outline from distance, the latter.

The tomb is open from sunrise to sunset, all through the year.